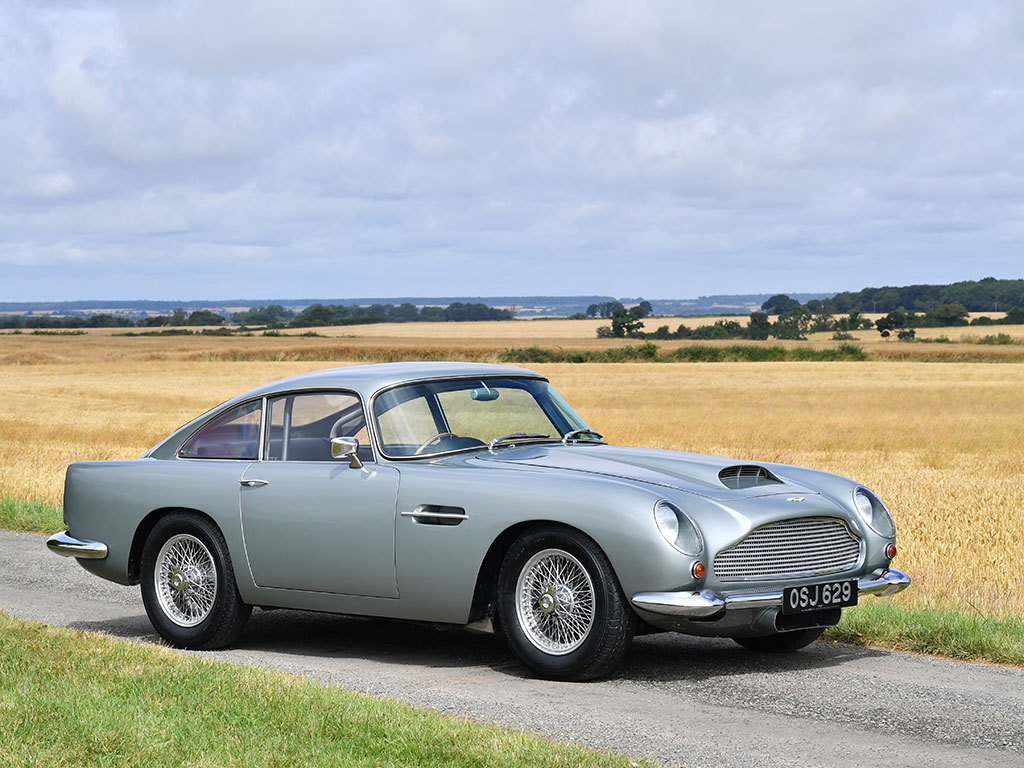 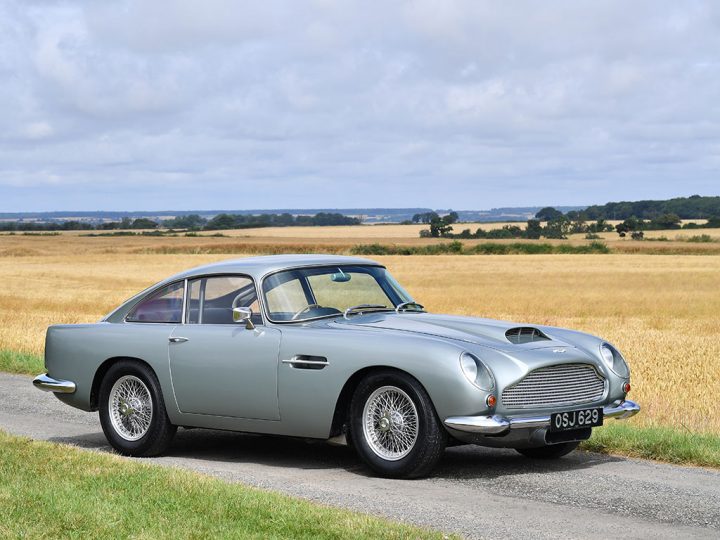 The stars aligned for David Brown and Aston Martin upon the introduction of the all-new DB4 model in late 1958. A competition-oriented variant, the DB4GT, was formally introduced in September 1959 at the London Motor Show, based on the race-winning prototype DP199/1. This was the year in which Aston Martin achieved outright victory at Le Mans (1st and 2nd overall, with Carroll Shelby and Roy Salvadori at the front, followed by Maurice Trintignant and Paul Frere), and took the World Sportscar Championship title, the smallest manufacturer ever to do so, before or since. The GT prototype won its first outing at Silverstone in May 1959, on Bank Holiday weekend, in the hands of Stirling Moss, and was one of the first cars away at Le Mans that June, in the same light green livery as the victorious Aston Martin DBR1s. 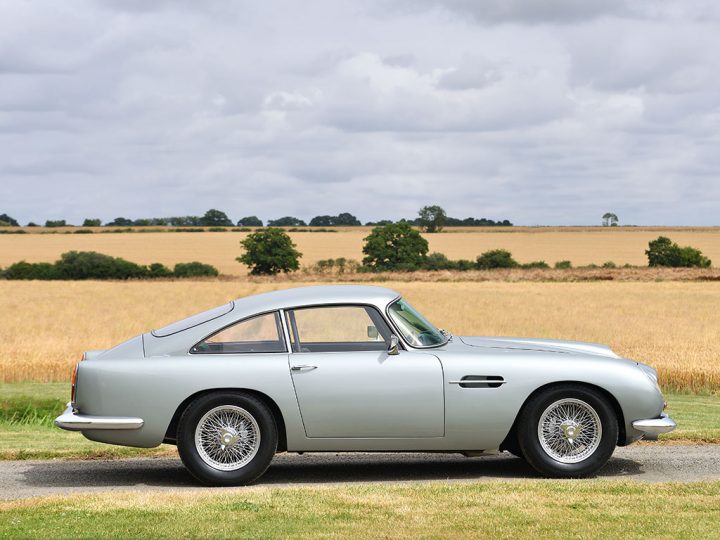 The GT was developed for increased performance by making it shorter, lighter, and more powerful than the production DB4. In order to save weight, the bodywork was of thinner, 18-gauge aluminium alloy, the wheelbase was reduced by 13 centimetres (approximately five-inches), and the rear seats were removed on all but a small number of special-order cars. Altogether, weight was reduced by 91 kilograms (200 pounds). The engine was extensively modified, featuring higher 9:1 compression, a twin-plug, dual-ignition cylinder head, and breathing through triple dual-throat Weber 45 DCOE carburettors. 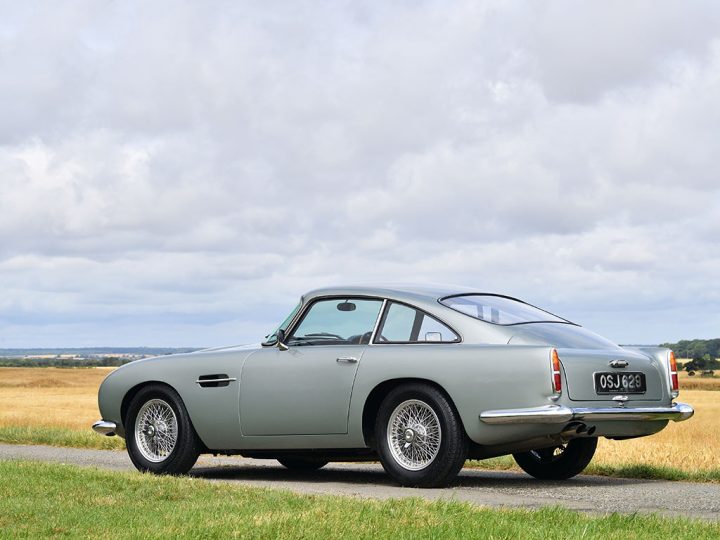 Power output was outstanding at 302 brake horsepower at 6,000 rpm, a useful increase from the claimed 240 brake horsepower of the standard car, and qualifying the GT as the most powerful British car of its era. Maximum speeds during testing reached 153 mph with a 0–60 time of 6.1 seconds. It was also one of the first cars that could go from standstill to 100 mph and then brake to a dead stop in under 20 seconds—a tribute, in part, to its uprated Girling disc braking system, as used on Aston Martin’s competition sports racers of the era. 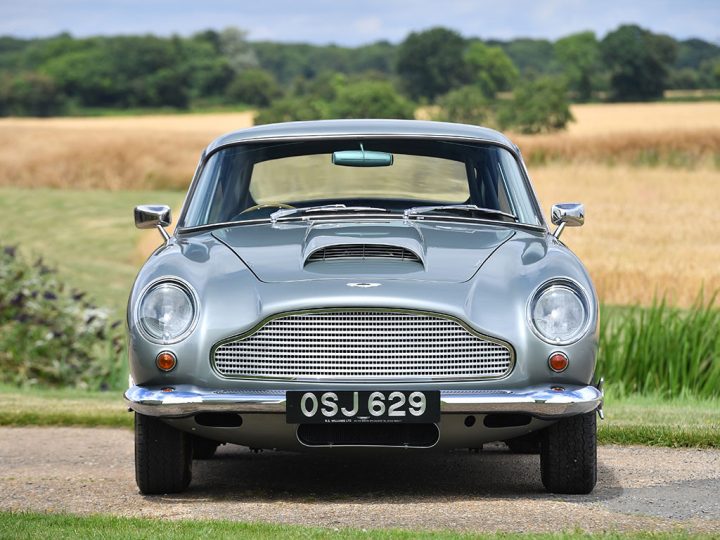 Outwardly, the GT is distinguished by faired-in headlamps with Perspex covers, a popular feature that was later adopted for the DB4 Vantage, then onto the DB5 and DB6 models. The rear screen and quarter windows were also made of Perspex, while the bumper overriders were deleted, and the roll-down windows were frameless within the lightweight aluminium structured doors. Twin, competition-style, quick-release Monza fuel fillers were added atop each of the rear wings, leading to a high-capacity fuel tank mounted flat in the boot. GTs were fitted with spectacular lightweight Borrani wire wheels, usually 72 spokes with light alloy rims, and distinctive three-eared knock-offs completed this handsome package. The interior was trimmed to full Aston Martin road car specification, with fine Connolly leather covering the lightweight seats and fitted with deep pile Wilton carpet. The evocative dash binnacle on the GT cars benefited from the addition of an oil temperature gauge, in addition to a purposeful array of individual instruments. 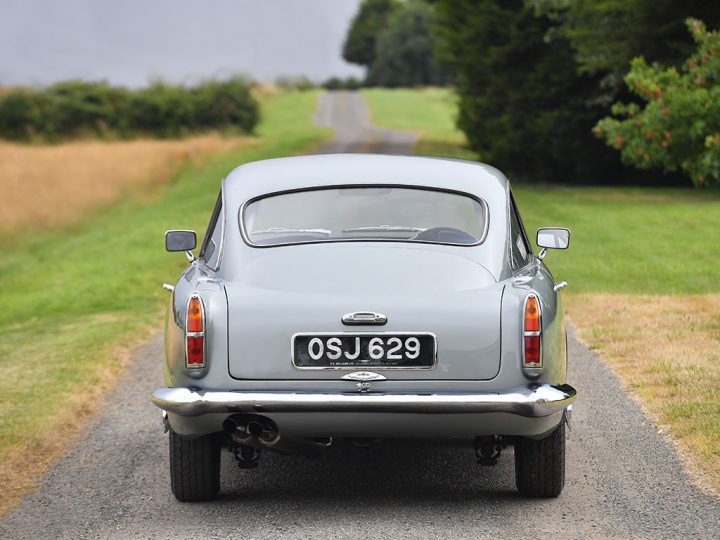 DB4GTs represented a strong challenge to the dominance of Ferrari in GT racing and enjoyed considerable success. Raced from 1959 by both the Works team as well as John Ogier’s Essex Racing Stable—and driven by the likes of Roy Salvadori, Stirling Moss, Jim Clark, and Innes Ireland—the GT earned its stripes every weekend on the racing circuit. In December 1959, at the Bahamas Speed Week, when another driver rolled the DBR2 intended for Mr Moss, the Works “borrowed” back a DB4GT just delivered to a Caribbean customer (DB4GT/0103/L), and Stirling handily won the next race—in an Aston plucked from the parking lot! 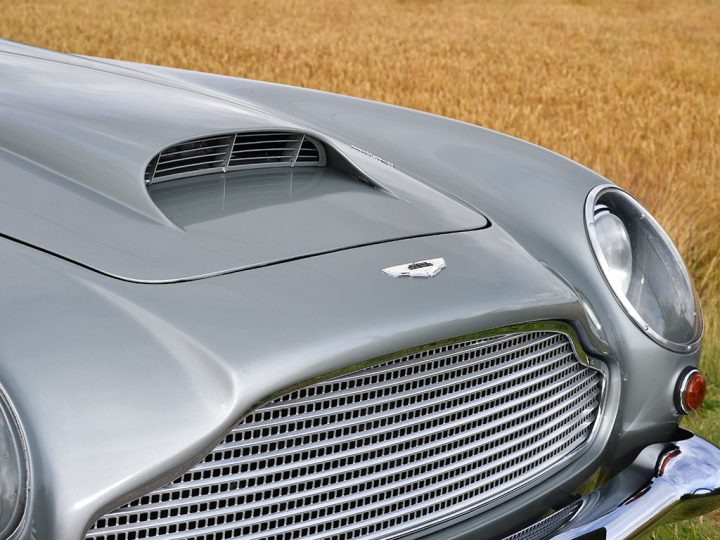 As noted in a soon-to-be published book on the DB4GTs by Aston Martin historians Stephen Archer and Richard Candee, “Rivalry was intense as Aston broke Ferrari’s winning streak. The short-wheelbase DB4GT was Aston’s response to the 250 GT ‘Tour de France.’ Ferrari retaliated late in 1960 with the potent 250 GT SWB, its nearest rival. Aston then countered with the extremely lightweight DB4GT Zagato in 1961. And so on, until Ferrari then launched its ne plus ultra GTO in February 1962.” 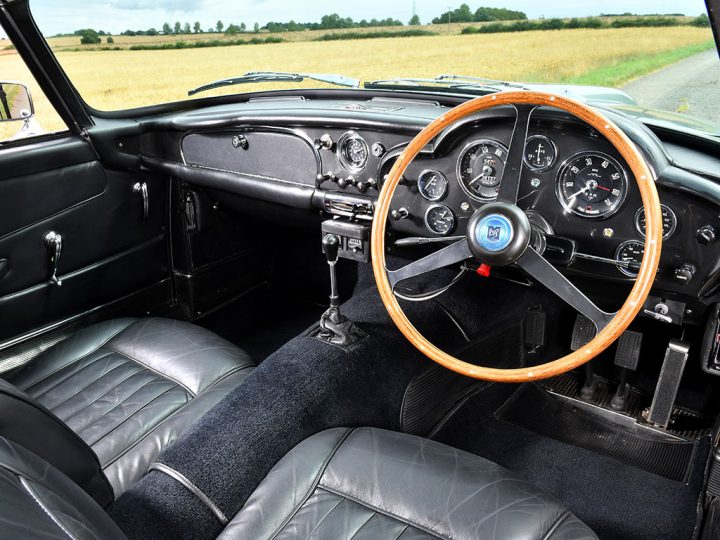 Despite its tremendous desirability and value, the GT is still a popular entrant at major historic racing events such as the Goodwood Revival, Le Mans Classic, and Aston Martin Owners Club race meetings in the United Kingdom. And the DB4GT has proven “Grand for Touring” over 1,000 miles with performance and comfort, often winning or placing in many long-distance road rally events, and eminently eligible for the Tour Auto, the Colorado Grand, the Copperstate 1000, and many more. 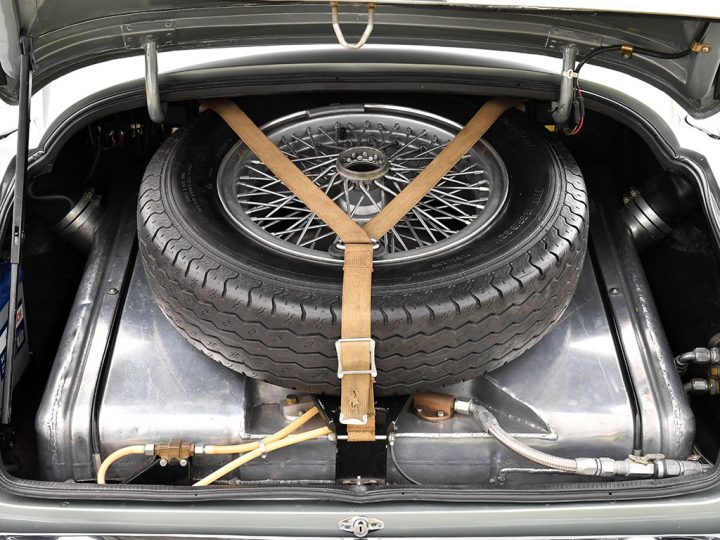 Produced between 1959 and 1963, Aston Martin built a mere 75 DB4GTs (plus another 19 of the Zagato-bodied derivations and one Bertone-bodied special). Of the 75 examples, 45 were supplied in right-hand drive and 30 were left-hand drive. Amongst the most beloved of all Astons, the DB4GT remains unmatched for its unique combination of performance and roadability. 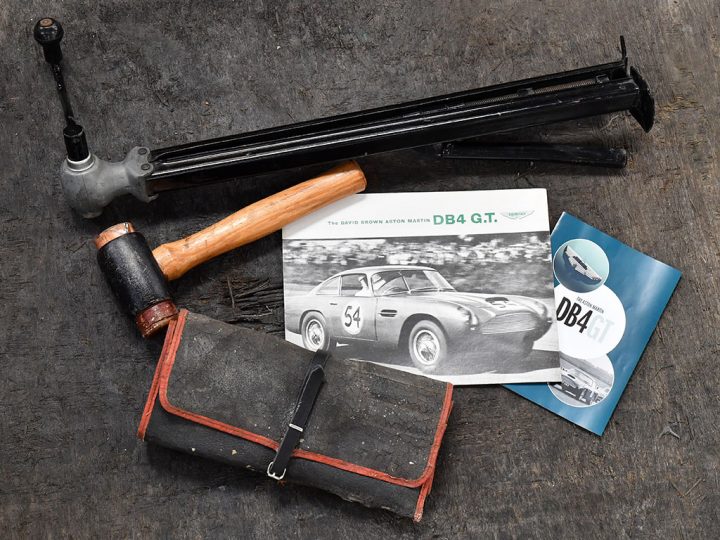 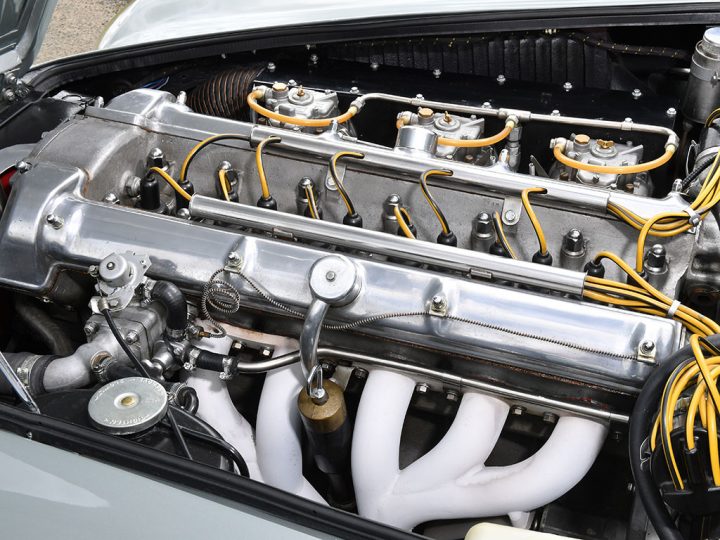 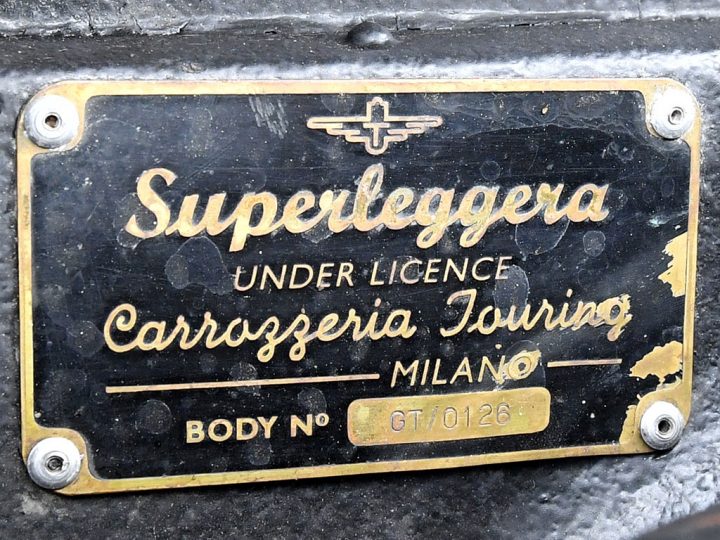 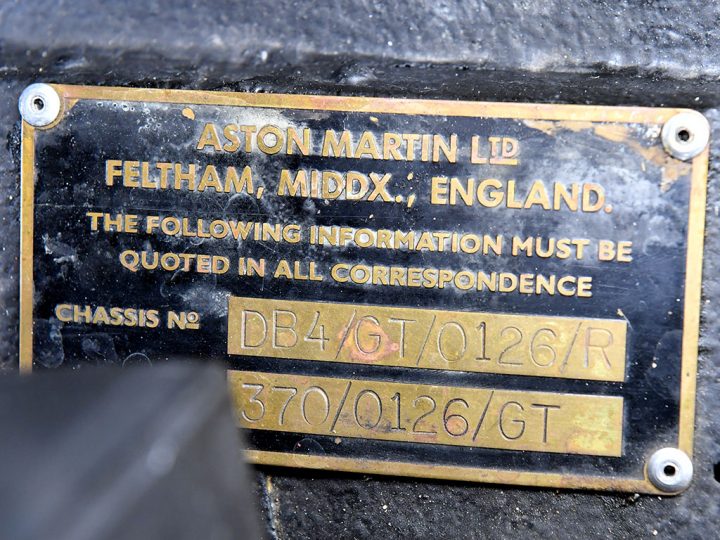