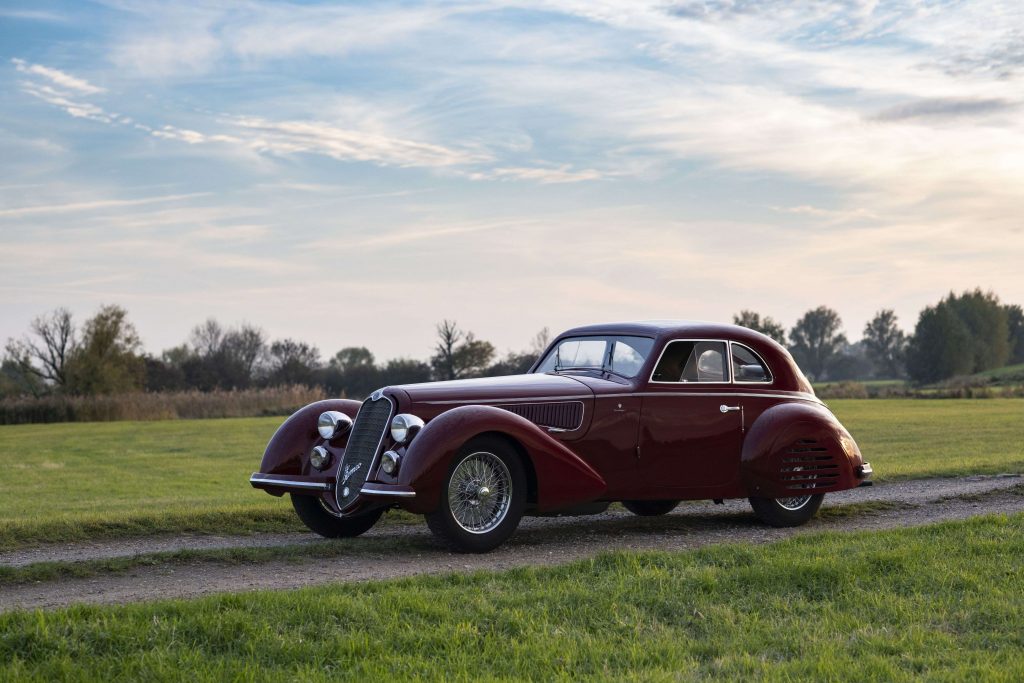 The Automobile that we present, is just as we found it, belonging to Jan Willem Martens, and is just as we love to discover a car: in used, original condition.
J.W. Martens is a man of great taste. You only need to step into the home he shares with his charming wife… to appreciate the family’s artistic and cultural sensibilities. Jan Willem studied architecture. His house, originally a farm, was was entirely designed by him, with an immense living room that showcases the original structure of the building magnificently. In the middle of the room, a huge fireplace flanked by patinated leather armchairs invite you for a conversation over a cup of tea or a glass of wine, in a simple and convivial way, after having enjoyed a splendid “quiche lorraine” baked in the former cook’s traditional oven. The walls are hung with Flemish pictures, a large-scale 18th century painting of a magnificent cow watches you out of the corner of its eye, and there is a lovely representation of a dancer, probably Mata Hari. Opposite the fireplace, a large bay window looks out onto another part of the old farm, transformed into garages. The whole is built in the traditional Dutch style, using red brick and wood. But to know that this is really a garage, one needs to go inside and discover a Fiat 8V Rapi, a splendid Alfa Romeo 6C 2500 SS cabriolet Pinin Farina with its original, weathered paintwork, its patinated leather interior, an Alfa 6C 1750 roadster, a totally original GTA, an Aston Martin DB5 and more. Jan Willem uses all his cars. They are all in their original condition, all immaculately maintained, as there is a comprehensive workshop set up in a corner of the garage. All of the tools are kept there in perfect order. Nothing is missing. And then, there is the 8C! Jan Willem knows every inch of this 8C. He started it up straight away and the engine didn’t hesitate. It was at that point that he suggested I take the wheel. As the various parts of the car warmed up, I was amazed by how agile the steering was. When cold, the gear change required a double de-clutch and when warmed up, it was smooth and regular. The car runs well, with surprising acceleration. You can hear the superchargers whistling, communicating the personality and potential of this beast. You are behind the wheel of a real race car, built to adapt to circuits or road races, such as the Mille Miglia.
The black leather interior is also in good, original condition, shiny and patinated. The mats have been changed at some point during its lifetime but the car itself has never been dismantled. By dismantled, I mean separating the chassis from the body for restoration. It is a car that has been regularly been looked after but that has never been taken apart. Over the past 43 years, Jan Willem has accumulated a large number of spare parts for the 8C. In the mid-1980s, he decided to have the engine rebuilt. He gave this job to Tony Merrick, the best 2.9-litre specialist at that time. Worn over time rather than over-use, the two cylinder heads and pistons were changed. Jan Willem sourced replacements from David Black, the great Alfa collector. Of course, all the original parts were kept and will be available for the new owner. The black leather interior was re-done at the end of the 1970s, when Lord Ridlett owned the car. It was then beige suede leather.
During the test drive, the conversation revolved around the 2.9-litre. Jan Willem told me that he had used it every day for two years, at the start of the 1980s! And then, when we returned and got out of the car, he went to find the original aluminium running boards, and positioned them where they would have been when the car left the factory. He looked at me and said, with an expression full of emotion: “This is what makes the car so special, don’t you think it complements its elegance beautifully?”
Jan Willem Martens’ father was an avid collector of automobiles and sailing boats, who owned many Talbots and Bugatti. He had a discerning eye, and always preferred models that were un-restored and original. His philosophy was that a restoration was irreversible and caused the object’s soul and the original intentions of its creator to disappear. His son, Jan Willem, inherited this way of thinking. It is for this reason that his Alfa Romeo has been kept in the condition it was in when he bought it, as original as possible, in order not to alter the marque’s spirit.
In short, as you will have understood, this Alfa Romeo 8C 2.9-litre has been very well treated, loved and cherished all its life, having passed through the hands of owners who have taken great care of it. Jan Willem told me he is merely passing on the baton, and is a simple custodian for this work of art. He said that it was now time to pass on the car he has loved so much to another collector, who, in his turn, would conti
nue its history. That way, it could be conserved for future generations, a testimony to everything that was great about the 20th century, a century that witnessed the development of one of the most revolutionary inventions of mankind: the Automobile.