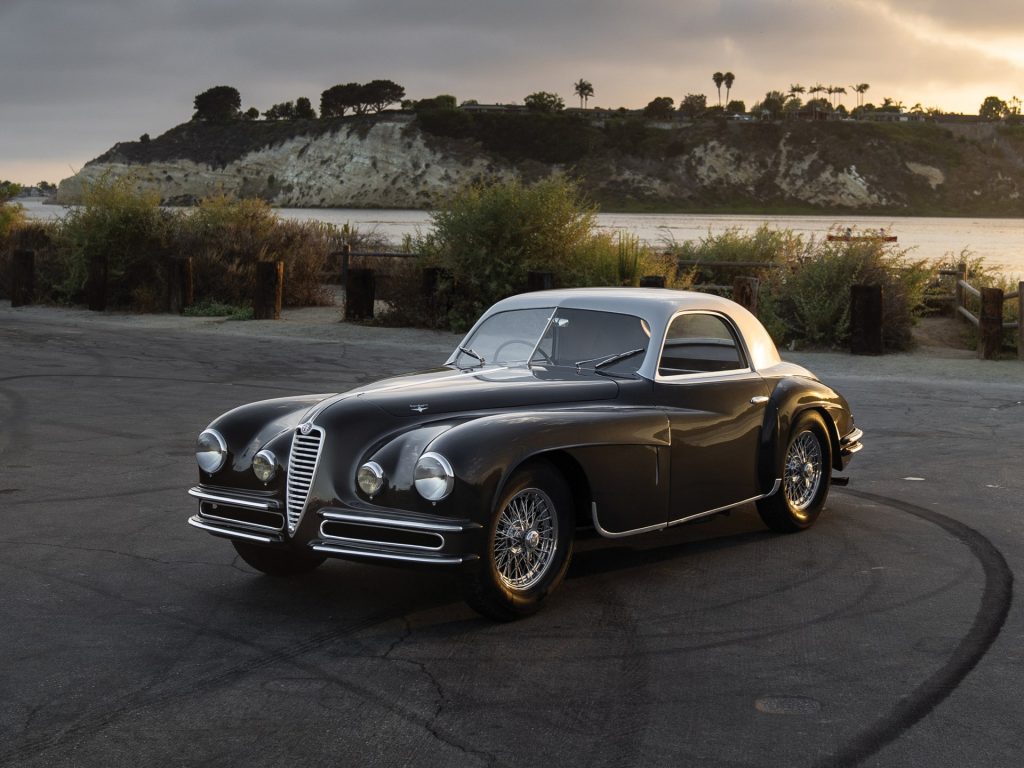 Following the bombing raids of 14 February, 13 August, and 20 October 1944, the Alfa Romeo factory in Portello, which was producing weapons during World War II, lay waste. The company changed course deciding to produce cars for the masses rather than continuing to build coachbuilt models for the elite. By 1947 when the 6C 2500 series was introduced, Alfa had dug itself out of the rubble and began civilian car production with an updated version of its pre-war 6C 2300.
The newly styled post-war series incorporated a berlina, two-seater coupe and cabriolet, and four-seat convertible, with bodies supplied by Touring, Pinin Farina, Stabilimenti Farina, Boneschi, and Ghia. Gone was the semi-rectangular grille of previous Alfas. In its place was a long narrow triangle not unlike today’s cars from Milan.
Under the hood resided a 110-hp dual overhead camshaft 2,443-cc inline six-cylinder engine with chain-driven camshafts and hemispherical combustion chambers. The engine breathed courtesy of three side-draft Weber carburetors. A channel section X-frame chassis was fitted with a front suspension by parallel trailing arms with an independent rear suspension consisting of swing axles and longitudinal torsion bars. Drum brakes were fitted at all four wheels. A four-speed synchromesh transmission was operated via a steering column-mounted shift lever in line with the fashion of the day.
In total, 383 6C 2500 SS chassis were produced following the war. The car was a favorite among coachbuilders and discriminating owners alike. Alfa Romeo was a frequent recipient of awards at the Concorso d’Eleganza Villa d’Este during this period, and in 1949 the special 6C 2500 by Touring won both the Coppa d’Oro (selected by jury) and the Gran Premio Referendum (selected by the public).
Chassis 915.831 was imported to Switzerland in May 1950. In November of that year, it was registered to Raymond Barbey, a private banker residing along the shores of Lake Geneva, and a neighbor to Hispano-Suiza engineer Marc Birkgit. Five years henceforth, Barbey gave the car to his brother, then living in Morocco, who maintained it until the 1970s. During the 1990s it passed through Germany, where it was restored, before being shipped to the U.S. and acquired by Swiss collector Marc Caveng.