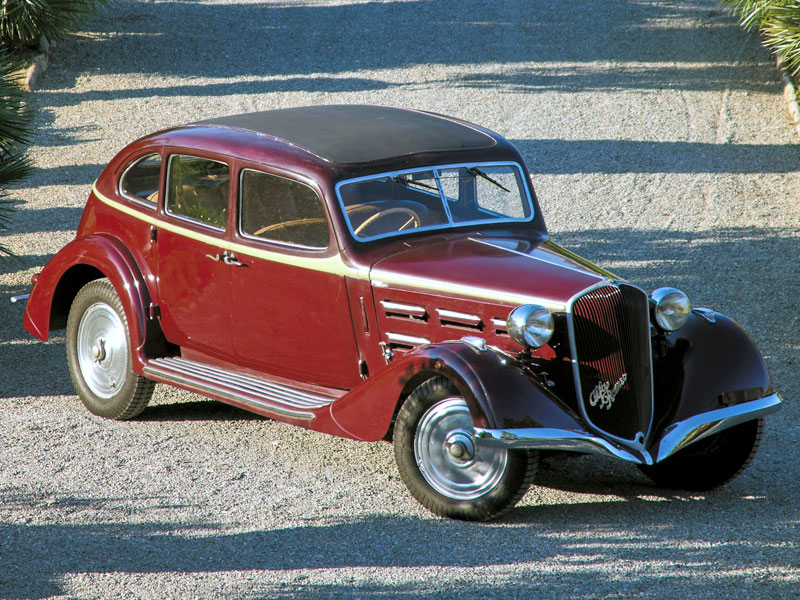 This example was known about but believed to have disappeared according to historians featuring, amongst others, Angelo Tito Anselmi and Carlo Felice Bianchi Anderloni, who discussed it in various books they curated including “Le Alfa Romeo di Vittorio Jano” and “Carrozzeria Touring”, both published in 1982.
People only believed that the vehicle had disappeared because its owner never used it for rallies, shows and elegance contests, but rather kept it jealously to himself for over fifty years.
Having described the car, its technical and stylistic features and its lineage, we now have the thankless task of writing a few notes about this vehicle’s first owner, a man whose influence was second to none not just in the small history of this automobile, but in the History of this entire Country, not to mention of Literature.
The original registration documents that accompany this Alfa Romeo certify that it was sold by the Company, on 12/4/1935, to Commander Gabriele d’Annunzio, Prince of Montenevoso.
It is certainly not up to us to describe the Man and his life, it is enough to say that in 1935 he had experienced very many battles – some real and others just described by him, and that he lived in his castle-mausoleum in Gardone Riviera receiving all types of personalities, just like a Ruler. A 72 year old man, which was a good age at that time, especially for someone who had always lived life to the full.
D’Annunzio had always loved beautiful cars and Alfa Romeos in particular. At times he entertained his neighbour from Mantova, Nuvolari, and they talked about engines… and possibly about other things as well. It was D’Annunzio who, many years earlier, decreed that “Cars are female”.
In addition to Alfa Romeos, he loved and often used Isotta Fraschini vehicles, one of which is still preserved at the Vittoriale. Many of them were sold by his son, Gabriellino, who represented the Milanese Company in the United States. Therefore we can say that, unlike many other more ascetic artists, he – a lover of beauty and luxury – knew and loved beautiful cars, and definitely used them as part of that whole symbological display that increased his aura and fame.
The Alfa Romeo we are presenting today was therefore in use at the Vittoriale in the last three years of the Bard’s life. It was used for personal trips and for welcoming some guests at the Desenzano station. With regard to the former, very few of these have been recorded since they were often clandestine, but many took d’Annunzio to Verona to meet the publisher Arnoldo Mondadori in order to check on the production of his books and ask for advance payments; Piero Chiara, in his “Vita di Gabriele d’Annunzio” (Mondadori, 1978) recounts as an example that, on 26 August 1937, d’Annunzio went to collect Ugo Ojetti (a journalist, scholar and Italian Academic), but also that the planned trip to Venice the next day was cancelled due to his weakness. Possibly one of the last journeys was the one at the end of July 1937, around six months before his death, which took the Bard, accompanied by his close collaborator Moroni, to Parma and to Verona.
Considering the state of the Bard’s health, it would be reasonable to think that most of the driving, or a significant part of the same, involved more than travel by the Bard himself errands, the transporting of guests and the delivering of messages that the illustrious owner produced and received in great quantities and that it was often not prudent to entrust to the services of the Italian Royal Mail.
However this “Ruolino di Marcia” also gives us an idea of how the Alfa Romeo was used quite regularly and carefully looked after: each date corresponds to an oil change and, on one occasion, the grinding of the valves. In the spring of 1937 the “Fondazione del Vittoriale degli Italiani”, was set up in agreement with the Bard who intended it “to save the Vittoriale from the clutches of greedy and cynical heirs” (Chiara, op. cit.), and the ownership of the Alfa Romeo was transferred to this Fondazione on 17/2/1940. However on 5th August 1946 the Alfa Romeo was purchased by the Società Autotrasporti Industriali of Busto Arsizio, thus losing its original number plate – BS 10764 – and acquiring the VA 18580 number plate that it still has today.
In April 1963 the 6C 2300 was purchased by two young brothers from Castellanza, in the province of Varese who have kept and looked after the vehicle until now. This car became part of their family life and was used rarely for special occasions or family ceremonies: for this reason it remained off the radar to traders and collectors and today is being presented again to a world which, in the meantime, had consigned its first owner to history and has recognized the value of great cars and, in particular, those like this one that have maintained their total originality and are, therefore, able to convey the work and brilliance of the people who created them to future generations.
The vehicle is completely original except for the speedometer which was replaced many years ago with a similar Jaeger one that has a white rather than black dial. It has never been resprayed or refinished, but the pillarless ‘suicide’ rear doors still work perfectly after eighty-three years and are impeccably aligned: recognition of the high value of the work of the Carrozzeria Touring engineers.