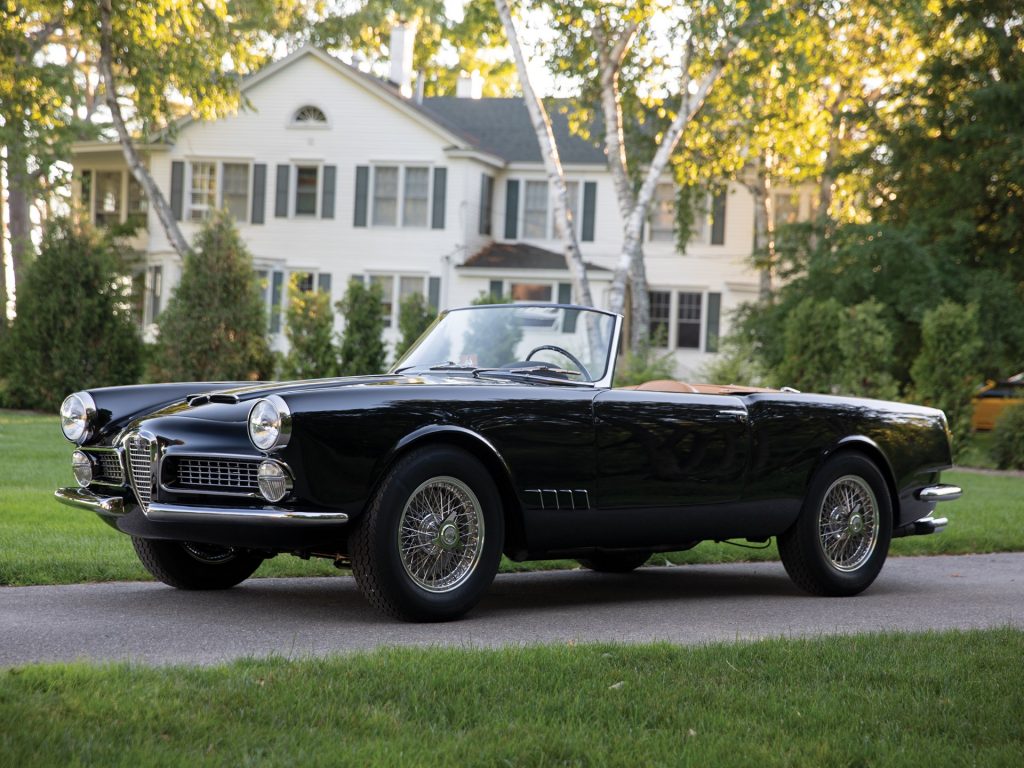 Post-war Alfa Romeo’s efforts were centered initially around its Giulia lineup, which aimed at putting Italy’s emerging middle class on the road. It was not until the 2000 was revealed at the 1957 Turin salon that Alfa Romeo’s lineup began to feel aspirational once again. The 2000 lineup replaced the comparatively dowdy 1900 and brought Alfa into the 1960s with elegant styling and a 104-hp, 2.0-liter version of the 1900’s inline-four. A conventional sedan debuted first, followed up shortly by the attractive Touring-bodied Spider.

About 3,400 Spiders were built during a production run that lasted from 1958 to 1961. Their twin-cam inline engines breathed a little better thanks to a pair of Solex side draft carburetors that bumped power output 113 hp. A fully synchronized five-speed manual transmission sent power rearward to a solid axle and drum brakes.

This particular Spider is believed to have been with just one family in Southern California for most of its life. It was then acquired by the current owner in 2013 as a highly original and complete example that he enjoyed for several years as-is. Before a restoration was commissioned by marque specialists in 2016, the Spider exhibited none of the rust that has been known to plague early post-war Alfa Romeos. At the time it was finished in white over red; it was subsequently refinished in the striking black over tan leather combination after a complete and comprehensive bare metal restoration. Chrome Borrani spoked wheels wrapped in Vredestein Classic tires match impeccable bumpers. Aside from the original serial number tags, everything has been refinished as original and appears in as-new condition.

Its interior is swathed in tan leather hides, including the seats which were refinished in Italy, as well as darker carpets and correct black Touring and Alfa Romeo-emblazoned black rubber mats. In its instrument cluster, the 2000 Spider’s Veglia gauges show less than 58,000 miles, a figure believed to be original. The gauges themselves were refinished by Palo Alto Speedometer.

Underhood, the Alfa Romeo received a comprehensive mechanical restoration that extended beyond its engine to its brakes and exhaust system and beyond. The black valve covers with the distinctive Alfa Romeo script match its dashboard, a popular visual tie-in for twin-cam Spiders. Further, this stunning Spider will be delivered to its new owner with receipts and photos that document its restoration.