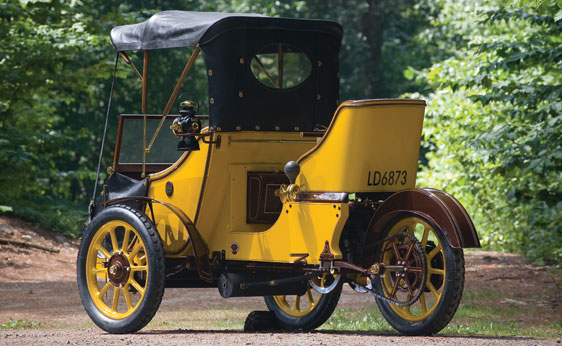 The success of John Weller and John Portwine’s Auto-Carrier Box Van suggested a market for an inexpensive family vehicle. In 1907 they sold a three-wheeler called “Tri-Car,” with a passenger seat in place of the box. Other versions placed the driver in the forward seat. In 1910 the name “Sociable” was adopted for this form of transport. It sold for £85, with hood, apron, lights and front-wheel brakes extra. The company name was changed to Auto-Carriers, Ltd., and new premises at Thames Ditton, Surrey were obtained in 1911. The firm would remain there until 1984.

This AC Sociable was purchased from E. “Rem” Baker of Liberty, South Carolina, a noted collector of cyclecars, in 1998. It was restored for John Moir in 1999 by David Steinman of Waitsfield, Vermont. As part of the restoration, Steinman supplemented the magneto ignition with a battery, but it could easily be returned to its original configuration.