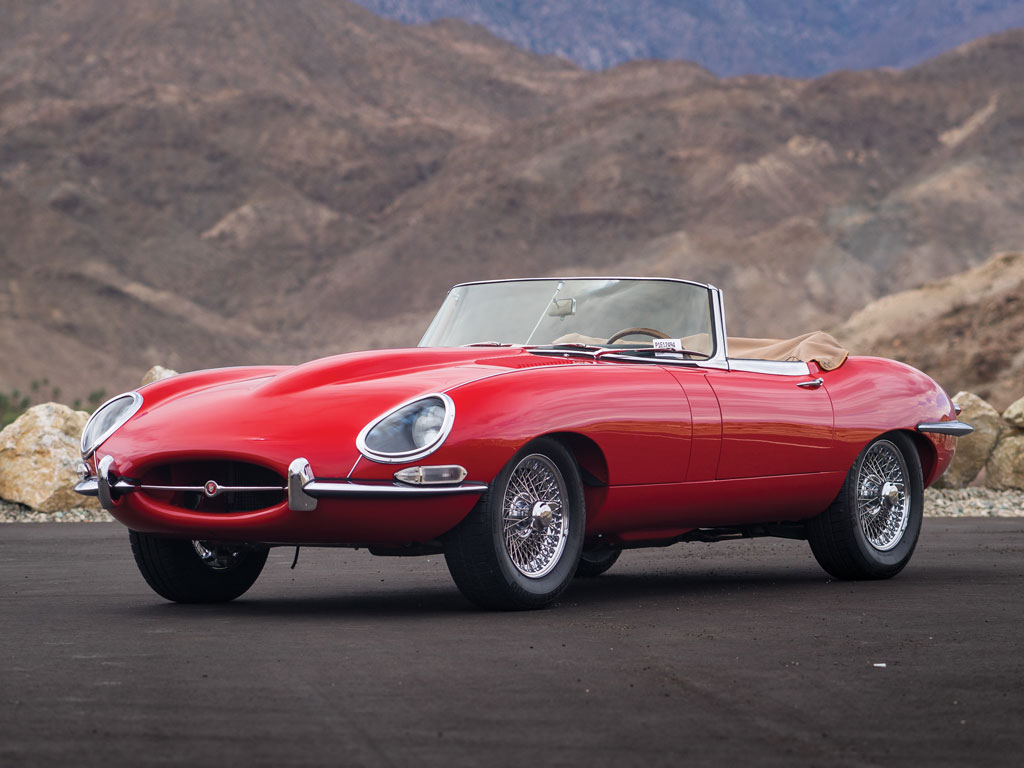 Jaguar had enjoyed great success with its XK series of sports cars, but the E-Type was not, as might have been expected, a continuation of the XK150. Instead, the XKE (as it was dubbed in the U.S.) was based largely upon a pair of prototype racing cars, E1A and E2A, which themselves borrowed heavily from the very successful monocoque-bodied D-Type racing chassis. In fact, E2A was the intended replacement for the D. Following earlier precedent, there would be two versions of the new E-Type, an open two-seater, or roadster, and a fixed head coupe, both with sleek and curvaceous bodies designed by Malcolm Sayer, a pioneer in automotive aerodynamics.

Under the E-Type’s broad front-hinged bonnet was essentially the same 3.8-liter twin-cam inline six as in its predecessors, producing 265 brake horsepower. The gearbox was a four-speed manual without synchronization on the first gear (known as the “Moss” box). Suspension, though, was thoroughly modern—independent all around. There were powerful four-wheel disc brakes, inboard at the rear to reduce un-sprung weight. Performance was astonishing, especially for its price. The E-Type had real 150-mph capability. The first examples did have some minor “flaws,” many of which were rectified in 1964 with a larger and more robust engine of 4.2 liters. Though it still offered the same 265 brake horsepower, it came with greatly increased mid-range torque: 283 foot-pounds versus the 3.8’s 240 foot-pounds. More importantly, though, was the introduction of a new, fully synchronized transmission with a new Laycock diaphragm clutch. Engine cooling was also revised, and there was a new alternator to replace the generator. The brakes were improved, with better power-assist, and the seatbacks were now adjustable.