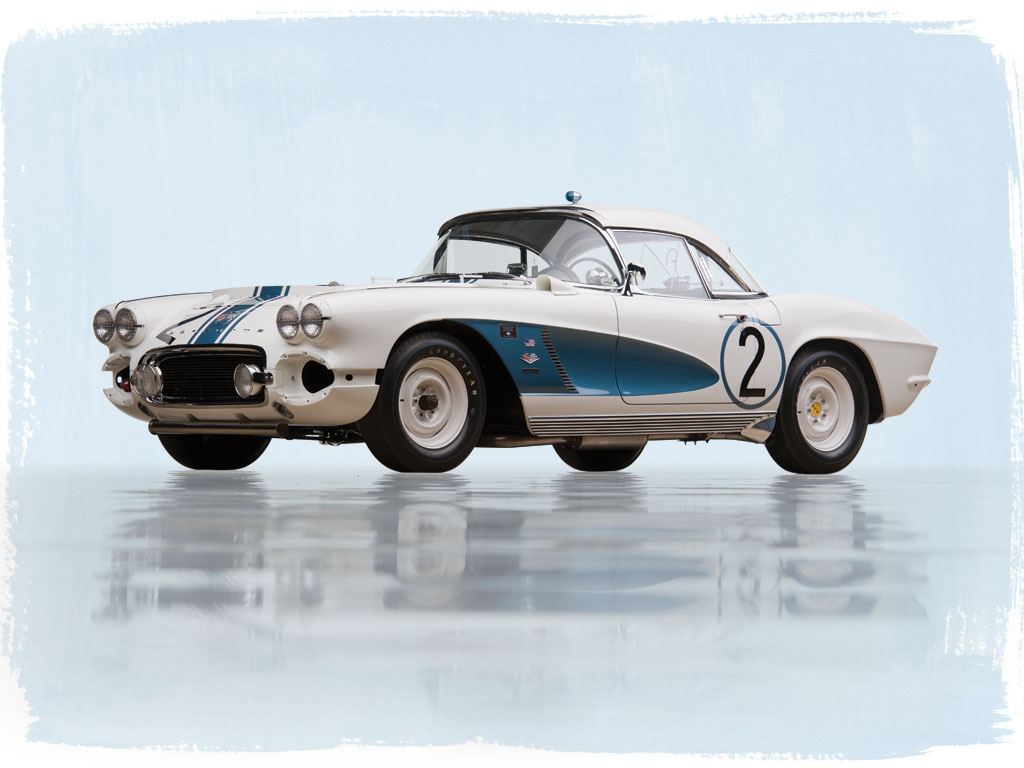 – The 1962 SCCA A/Production champion
– Driven by the legendary Dr. Dick Thompson for Grady Davis’s Gulf Oil Racing team
– Winner of the first-ever NCRS American Heritage Award
– Extensively documented, authentically restored, and beautifully maintained
– One of the most significant of all Corvette racing cars

Undoubtedly the most cherished and desirable Corvettes of all time are those that took to the race track in the 1950s and 1960s, where they would do battle with Europe’s finest. In this regard, the Corvette was truly America’s sports car and a symbol of the Land of the Free’s ingenuity, tenacity, and a never-ending desire to be and beat the best.

The 1962 Corvette offered here is one of the most iconic Corvettes in existence. It wrote its name into the history books over the course of the 1962 racing season, and it was associated with a number of individuals who were hugely important not only to the history of the Corvette but also American sports car racing.

The Corvette was already a very desirable car by the time it came off the production line, as it was fitted with the 327/360 fuel-injected engine, a massive 37 gallon fuel tank, and the highly capable RPO 687 package, which was a package that only 246 Corvettes received that model year. This option put the car in virtually race-ready condition “as-is,” as it added heavy-duty brakes, suspension with special rear shocks, additional air scoops for the brakes, and a quicker steering ratio.

After being completed, it was sent to Don Yenko’s famous Chevrolet dealership in Cannonsburg, Pennsylvania, from which it was sold to Grady Davis’s highly successful Gulf Oil Racing team, who prepared it for competition in the 1962 SCCA A-Production series.

A CORVETTE AND A DENTIST

The racing record that followed was truly astounding. Starting with the Daytona National race on January 28, Dick Thompson, known as “The Flying Dentist” for his somewhat less glamorous day job, piloted the Corvette to a 2nd place finish in this highly competitive event. That would be just the beginning of the Corvette’s success, and the lowest place it would sit on the podium that year. It returned to Daytona a few weeks later, for the Continental 3 Hour race, and it won its class. The car would see an identical result at the 12 Hours of Sebring, with Duncan Black and M.J.R. Wylie behind the wheel, thus cementing the Corvette’s credibility on the world stage.

Sebring was the only event that Thompson sat out of, but he would be behind the wheel of the Corvette for the remainder of the year. Throughout 14 races, the Corvette chalked up an incredible 12 wins following Daytona and Sebring, at such race tracks across the northeastern United States as Watkins Glen, Road America, and the Virginia International Raceway. That season helped to cement Dr. Thompson’s reputation as not only one of the greatest drivers in SCCA history but also one of the greatest drivers to have ever piloted a Corvette in competition.

Following the end of the 1962 season, the Corvette returned to Yenko Chevrolet and was purchased by Tony Denman, who continued to campaign the car. It returned to Daytona for the 250-mile race, as well as the 3 Hours of Daytona, placing 6th and 22nd overall, respectively, which translated to a 2nd in class on both occasions. This was quite impressive considering that Denman had been racing for less than a year at the SCCA Driver’s School (with Thompson as his instructor). Nineteen sixty-three would be the end of the Corvette’s racing career, as it was converted to street specifications and sold at the end of the season.

For the next 20 years, the Corvette’s racing history remained unknown, as it was driven as a street car, repainted green, and then red, and then passed through just four owners during this time. It was purchased by Rev. Mike Ernst, a Lutheran minister and a known Corvette expert, who found the car being used as a daily driver by a college student who was completely unaware of its racing history. Ernst confirmed not only that the car was sold new with the RPO 687 package but also that it was a legendary piece of Corvette history. He was further able to confirm the car’s identity throughout the disassembly process, prior to a restoration.

Although a number of the car’s racing components were missing, Ernst was able to track down the missing parts through Tony Denman, who had kept the components in his parents’ garage before selling them in 1979. Ernst was able to buy the missing parts back in May 1985, reuniting the Corvette with its original engine block, cylinder heads, exhaust manifold, Yenko heavy-duty suspension, Stewart Warner gauges, and roll bar, amongst other original components.

Following the completion of the restoration back to its Gulf Oil livery in 1987, the Corvette hit the show circuit and almost instantly began receiving awards. The car appeared at Bloomington Gold in 1987, where it was displayed as part of the Special Collection, which was made up of historically significant Corvettes. That summer, it was invited to the Monterey Historic Automobile Races, where it would take to the track for the first time in over 30 years. It was only fitting that Tony Denman, the last person to race the Corvette competitively, would be invited to get behind the wheel at this event. Under Rev. Ernst’s ownership, the Corvette returned to Bloomington in 1994 and 1997, and it also received the NCRS’ first-ever American Heritage Award, further celebrating its historic significance.

Rev. Ernst sold the Corvette to Vic Preisler, who had the car restored once again, and he continued to proudly show it off on the race track and at concours events.

In 2003, the 50th anniversary of the Corvette, this car was quite a frequent sight at numerous events that celebrated Chevrolet’s milestone. It was displayed and raced at the Monterey Historic Automobile Races, the Corvette 50th Anniversary celebration in Nashville, the Los Angeles Auto Show, the Petersen Automotive Museum, and the Sebring Race Corvette display. Following an invitation to participate at the Corvettes at Carlisle Race Car Reunion in 2004, the car was inducted to into the Bloomington Gold Hall of Fame.

The car received another restoration in 2007 and was once again invited to Corvettes at Carlisle, where it was part of the Chip’s Choice display in 2007. The Corvette was purchased by the Andrews’ in 2008, and it has remained in their collection ever since, amongst many other great performance cars of the era. This Corvette is accompanied by an extremely impressive and comprehensive file that contains documents and photos from throughout its life, and it remains ready to return to the show field or the race track, where it would be welcome with the best.