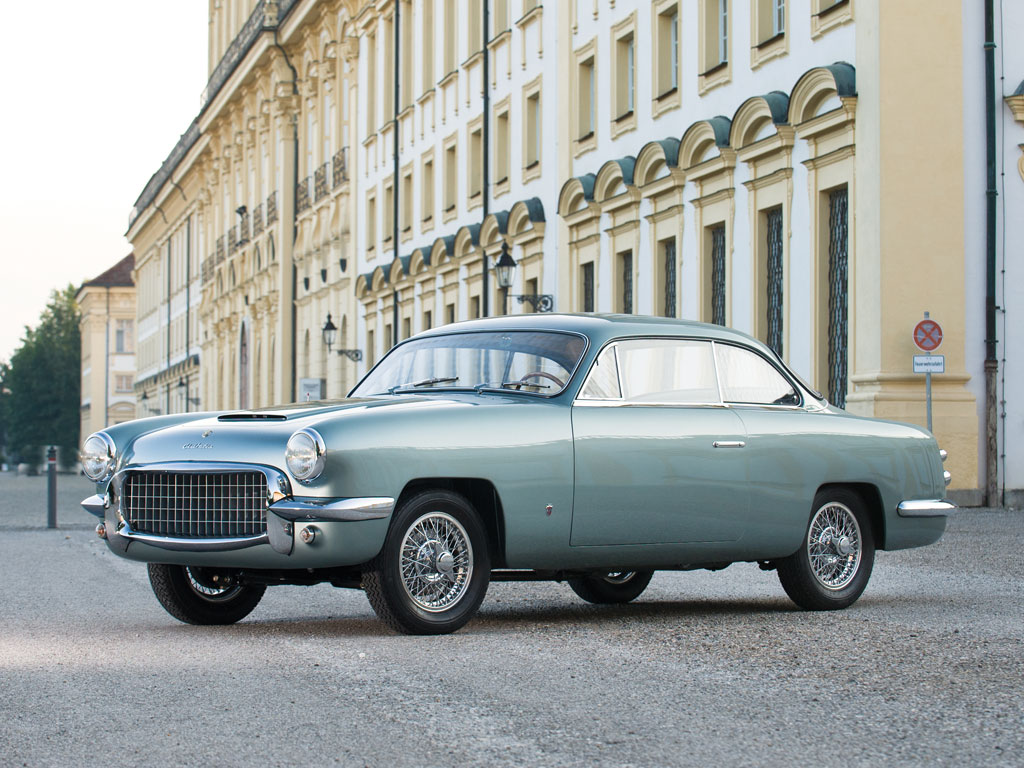 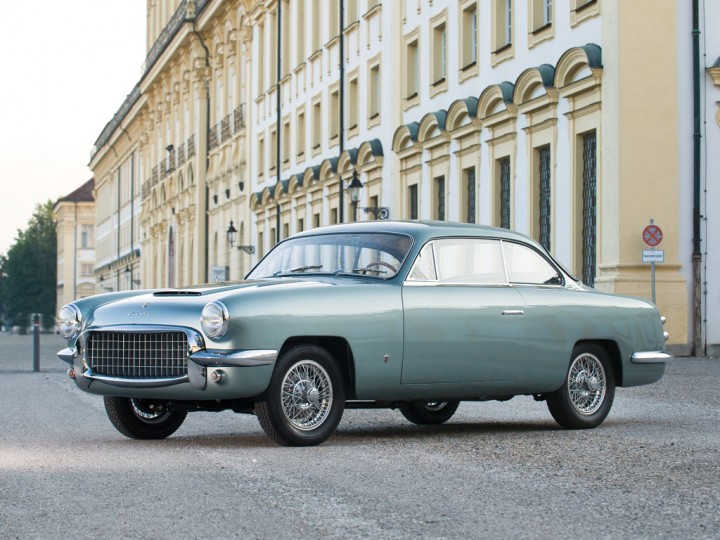 Cisitalia was the brainchild of Piero Dusio, an amateur racing driver of considerable skill and a bit of a playboy. He parlayed a textile company into a sporting goods conglomerate and did well supplying uniforms to the Italian army during World War II. At war’s end, with an equally considerable fortune, he hatched plans for a racing car of his own manufacture. In 1946, he produced seven D46 monoposto racers, which he entered in the Coppa Brezzi, the first post-war closed circuit race in Italy. During this race, legendary Tazio Nuvolari broke his steering wheel and drove his D46 for two laps without it. 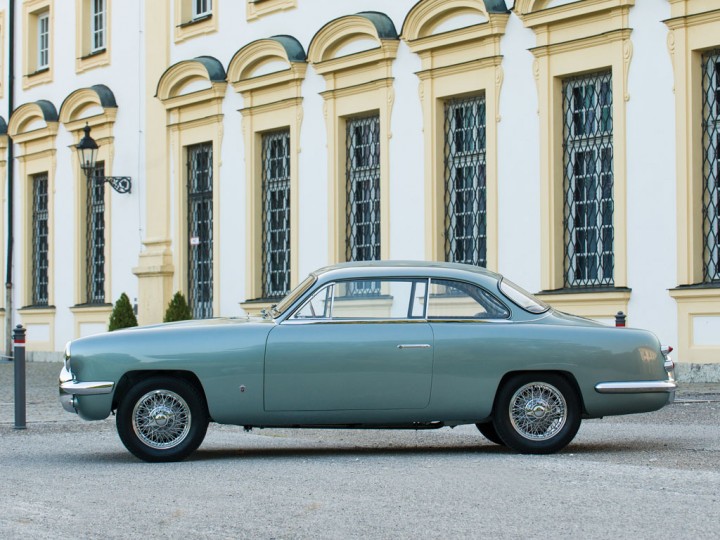 The definitive Fiat-based Cisitalia was the 202 coupé by Pinin Farina, which was first shown in 1947. It is perhaps best known for its appearance at New York’s Museum of Modern Art in the landmark exhibit 8 Automobiles in 1951, subsequently becoming the only car in the museum’s permanent collection. Henry Ford II purchased a 202 cabriolet and was reportedly so pleased with it that Dusio approached the automaker with a proposal for an Italian-American hybrid. Ford confirmed that he was interested, so three prototypes were built using a variety of Ford engines and chassis. The first car had a svelte coupé body that had been designed by Cisitalia’s chief engineer, Giovanni Savonuzzi, and built by Ghia. The subsequent Ford-based cars were bodied by Vignale. 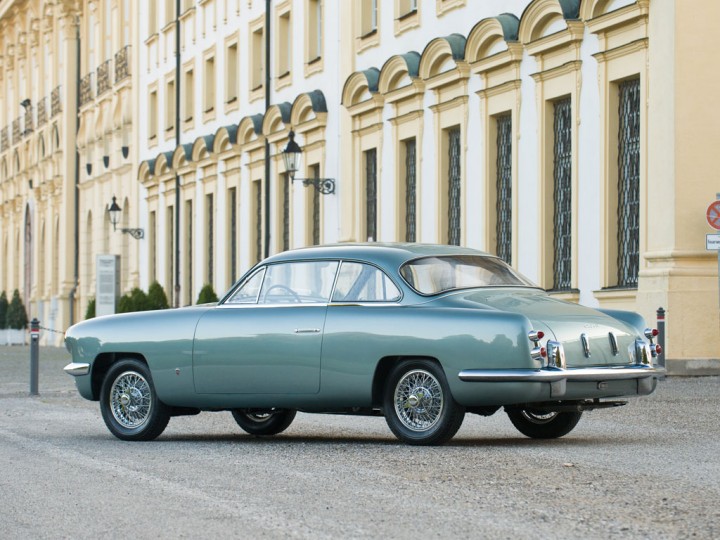 Although the Cisitalia-Fords, designated Model 808, were a stillborn effort, Savonuzzi’s lines lived on in some Chrysler concept cars, notably the d’Elegance and the Thomas Special, also bodied by Ghia, and ultimately in Volkswagen’s Karmann Ghia. Although the Ford project was progressing, Dusio decided to spin off Savonuzzi’s coupé as a European car, using the Fiat 1900 as a base. Thus emerged the 505 DF (for derivata Fiat), using the Fiat’s 1,901-cubic centimetre engine, which had been up-rated using a modified cylinder head and Weber 34 DR 6 carburettors on a Cisitalia manifold. Furthermore, the camshaft, pistons, and exhaust system were upgraded much like those on the Abarth cars of the same time period. The gearbox is the rare five-speed manual unit with overdrive. 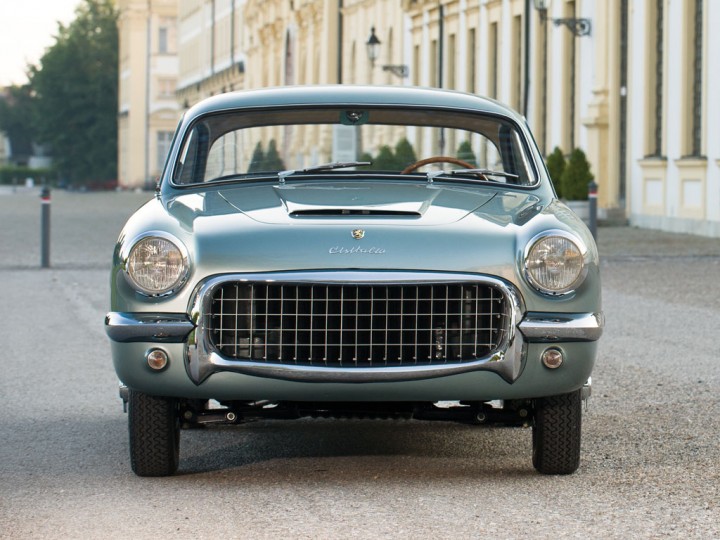 The first 505 DF was shown at Salone Geneva in 1953. Chassis numbers indicate no more than ten were built, of which only two are known to survive. Chassis number 0209 is the only one restored and operational. This Cisitalia 505 DF, bearing the penultimate chassis number, was delivered in July 1953 to noted race car driver Fritz Stolz, of Peseux, Switzerland, after Salone Torino. Although not confirmed, it is possible that Mr Stolz bought the car from the salone, which took place shortly before. Mr Stolz kept it briefly and then sold it to Josef Steiner, of Zürich, in April 1954. Successive Swiss owners included Josef Marbet, of Neuendorf; Walter Grell, of Rheinfelden; A. Egli, of Moosseedorf; and an unknown party who owned it in the 1980s. Holger Kluge, of Bremen, Germany, purchased it in 1989 and had started restoration efforts in the ’90s. However, the work did not progress far, and the car was acquired by the Fendt Collection in 2005 as a restoration project. Unfortunately, the engine was sand-blasted by the previous owner and the original engine stamping, number 0209, had been removed. The current number, 01/590, was stamped by the blasting company, according to a statement by the previous owner. 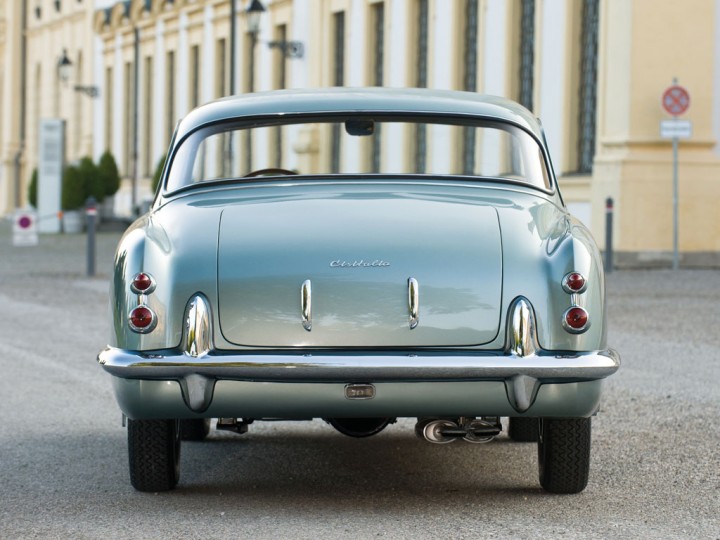 Since acquisition by the Fendts, the car was subject to a mechanical restoration by Formula GT GmbH und Co. KG in München, which took place from 2005 to 2007. During this time, the Fendts also spent a significant sum recreating the challenging interior. Wanting First in Class results, they proceeded to send the car to D&D Classic Automobile Restoration in Ohio, USA, in 2011. Whilst there, the car was given a given a full nut-and-bolt restoration, where every part was subjected to scrutiny and overhauled or restored where necessary. No expense was spared during the three-year project, with invoices accumulating to in excess of $230,000. The final details were ensured to Leo Aumüller, of Schönbrunn, who is well-known for his work on Abarth and Fiat cars in Germany. Upon completion, the car earned Best Restored Car honours at the 2014 Schloss Bensberg Concours in Germany. 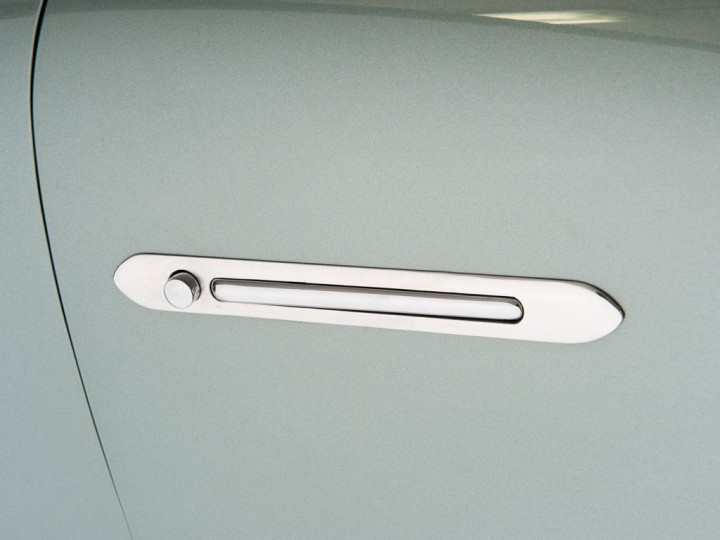 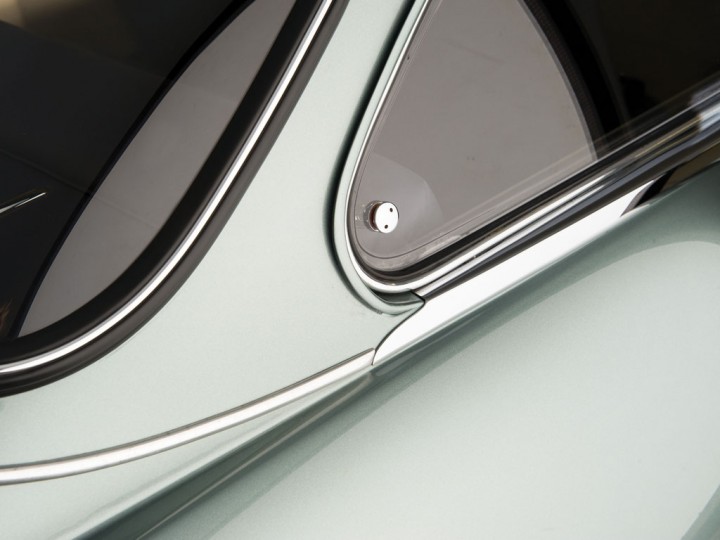 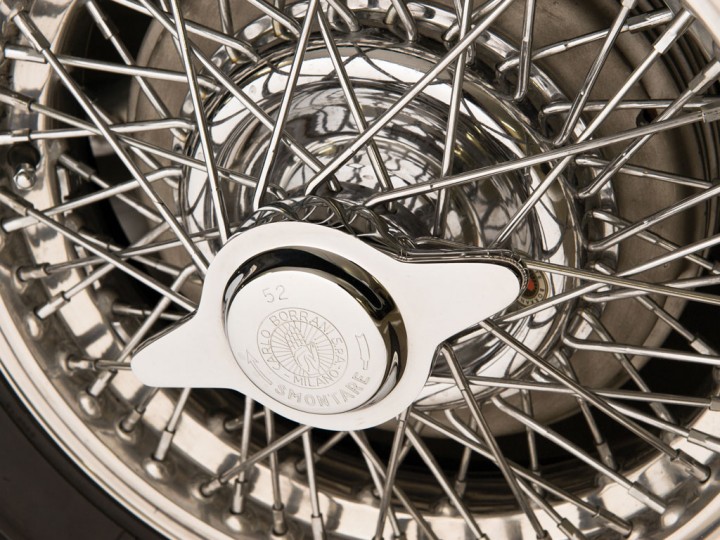 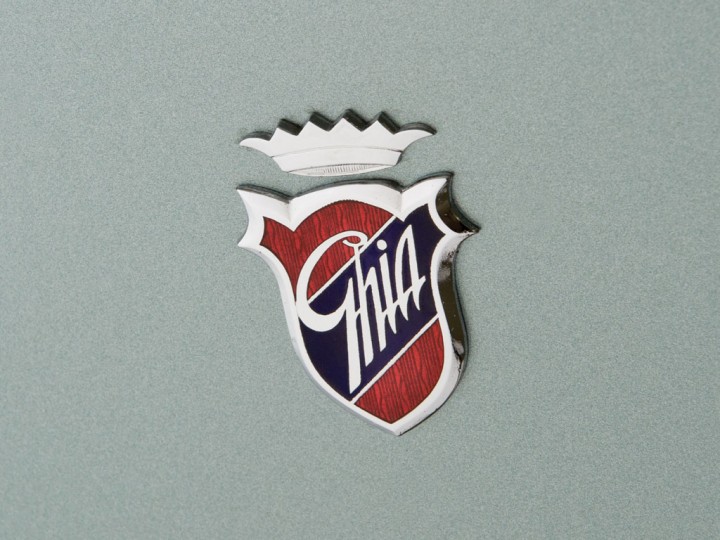 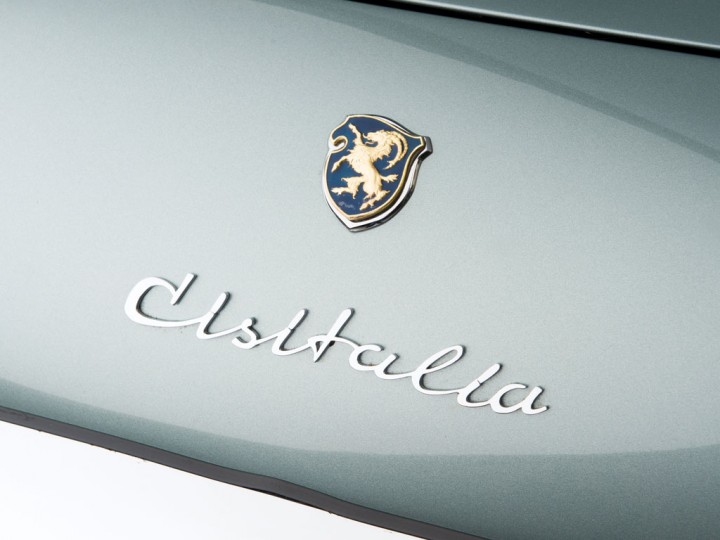 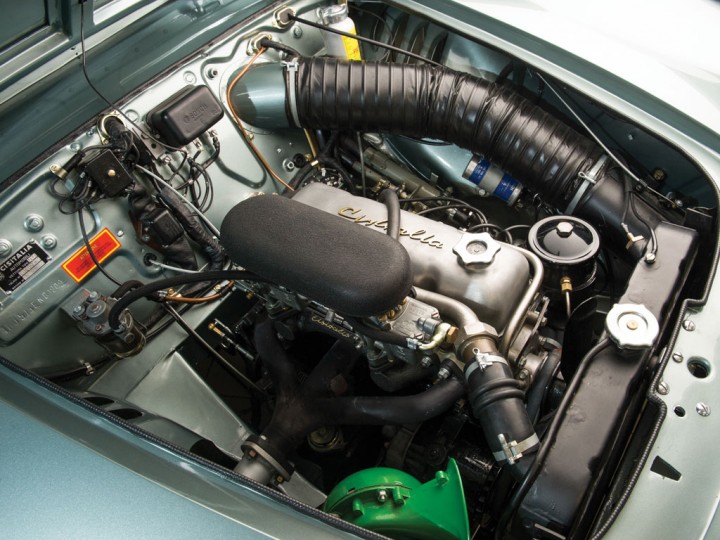