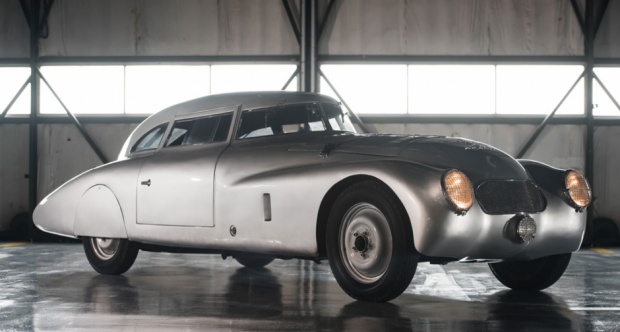 Adler took Jaray’s ideas and developed them into a Rennlimousine, or racing sedan, for the Trumpf chassis. At least six of these cars were produced in the late 1930s, each of which was a continuous evolution from the previous example. What the designs shared was the Jaray half-spindle with wings design, including a curved windshield. These cars were used extensively for testing, demonstrations, show appearances, and, especially, record setting and racing.

According to historian Martin Schröder, chassis number 167 671, offered here, was probably the #34 car, one of three entered by the Works team in the 1937 24 Hours of Le Mans. Driven by Otto Löhr and Paul von Guilleaume in the 2-liter class, it finished 2nd in class and 9th overall. Schröder determined that this car then attended the 24 Hours of Spa-Francorchamps in 1938, as #32, driven by Sauerwein and Orssich and withdrawing following an accident. It was then rebuilt by the factory, with an amended front-end design, and given to the company’s foreign importers as a show car for demonstrations.